Del Smith has been a professional snooker player for the past 30 years and is one of a select number of WPBSA World snooker qualified snooker Grade A Level 2 Player/coaches.

Del enjoys coaching and helping people of any age or level, from beginners right up to other professional players.

Del Smith Has ran many of his own Coaching Clubs at both Junior and Senior level.

In the past 23 years Del has been head coach at many televised ranking tournaments for World Snooker and Cue Zone areas and when these first started Del was responsible for creating many of the coaching routeens and games you may see still used today by other coaches.

DEL SMITH COACHES OTHER COACHES HOW TO COACH SNOOKER

With So many People wanting to Coach snooker today, Del has had a role to pass on some of his experience / coaching methods to coach other snooker coaches how to get the fastest and best results.

Or why not book a one to one coaching session with Del Smith today.

Del started playing snooker aged 12 years old in Ilford Snooker Centre, Essex in 1986, and from that very first night of playing snooker he wanted to be a professional player like his idols on television like Steve Davis, Alex Higgins and Jimmy White.

With the help and guidance of his father Derek, Del would practise every day at the Ilford Snooker Centre where he would practice and play with many of the other youngsters who subsequently went on to become some of todays best players, for example Ronnie O'Sullivan, Peter Ebdon, Mark King, Ken Doherty and Joe Swail together with many other great players.

Del would spend most of his time in solo practice sessions doing the routines that he and his father devised, some of which are now widely used by other players and coaches all over the world today as solo practice was not something that anybody else did apart from the storys of Steve Davis we would hear at that time playing on his own for hours on end Hitting the cue ball up and down the spots which most players playing snooker at that time thought scary and a bit odd to play on your own and was called boring really? My father had so many near arguments and discussions with other players fathers and older players that would say I should play games much more instead of solo practice on my own all the time, later we found out that the correct balance between solo practice and games play and a mixture of as many snooker tounaments as you can is the key to the fastest improvement.

Just before the end of his first year playing snooker, Del made his first century break in practice of 101.

At weekends Del and his dad would travel around the country to play in snooker pro-am competitions, etc and got to compete with all the best of the best players in the world being the top amateurs and not the professionals at that time apart from just a few at the highest rankings, the top 100 amateurs were the ones to beat that would travel all over the UK looking for the best money events.

In 1991 he turned professional at the age of 16 and he made his first maximum 147 break while playing his father at Romford Snooker Club this feat being witnessed by a very proud club manager Mr John Moth together with the other players at the club.

At the time, Del was one of the youngest ever players to make 147 break.

In 2004 Del Smith Set out to Make his own Home made style of Coaching DVD video that was aimed at basic skill level to help new players get first hand help with some of the basic skills needed to improve to a playing level. This was called SNOOKER GUIDE (all the basics Vol 1) by Del Smith.

In 2008 with such a lot of player demand Del followed up with the 2nd DVD of snooker coaching called SNOOKER GUIDE Vol 2 (The Next Step) for players wanting more advanced tips, hints and practice routeens.

After modest sales of both coaching DVDs it was agreed the quality could be better and made again in top 4k quality.

In 2016 Del was Filmed by a top crew of filming professionals who captured the first Volume 1 again looking for the quality and THE SNOOKER COACH (all the basics VOL 1) was remade to good review.

Del has coached at the following World Ranking tournaments and non Ranking Events plus exhibitions and in World Snookers Cue Zone areas as Lead and head Coach.

In 2000 Del was asked to act in a television advertisement for Prodent toothpaste in Amsterdam, Holland and appeared as a snooker player who sent a ball flying in to the crowd. The advert was a very big success and was used for two years.

Del coached the actors Adrian Dunbar and Jonjo O'Neil and also landed a part as Eric Law in the show playing snooker.

Del was told by all he did a great job. 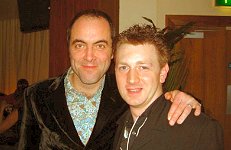 James Nesbit and Del Smith on the set of Murphy's Law 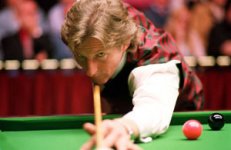 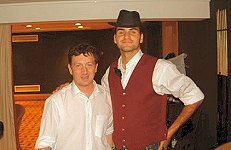 Roger Federer and Del Smith filming for Question of Sport

The SnookerStuff.com website was founded and is run by Del Smith who has been a professional snooker player for the past 20 years and is one of a select number of WPBSA qualified snooker coaches.

Subscribe to our occasional newsletter to get important news and amazing offers:

We guarantee that all branded goods are 100% Original.

We accept card payments via PayPal and WorldPay plus you can pay by cheque or online banking.